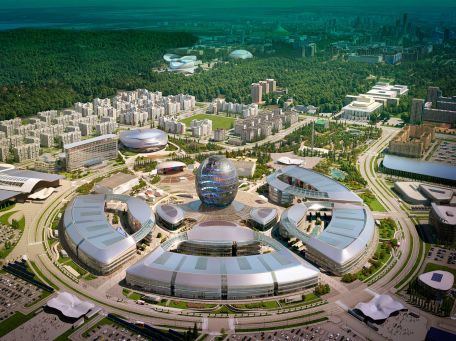 Specialized Expo 2017 was officially opened on 10 June in Astana, the capital of the Republic of Kazakhstan. The Expo, which is taking place on a site covering 25 hectares, will be open to the public until 10 September 2017. The BIE Member States elected Kazakhstan as the host of Expo 2017 during the General Assembly of 22 November 2012, and Expo 2017 Astana was formally recognized by the General Assembly on 11 June 2014. Expo 2017 is being organized under the theme Future Energy. This, along with the three subthemes – Reducing CO2 Emissions, Living Energy Efficiency, and Energy for All – allow the Expo to present the state of energy today and to showcase sustainable solutions and innovative technologies. Expo 2017 organizers expect over 5 million visits during the 93 days that it is open. Kazakhstan has made considerable progress towards establishing a market economy and providing an attractive climate for foreign investment. The country has abundant natural resources. The country has substantial quantities of petroleum deposits, natural gas, coal and uranium.

Rapid economic growth in the past decade has led to an increase in primary energy consumption and a growing electricity demand according to Kazakhstan Photovoltaic (Solar PV) Market: Outlook 2016÷2025

Renewable Power Generation Potential and Targets of Kazakhstan by 2020

The domestic energy sector of Kazakhstan remains heavily dependent on coal to deliver its power and electricity needs. Huge investments are needed to modernize, decarbonize and replace the old and unreliable power system in Kazakhstan. According to the project ‘2030 Development of Kazakhstan's Power sector’, the total capital investment required in generation capacity is about 3-4 billion US dollars annually.

Increasing energy consumption and concerns about environmental pollution drive new interest in renewable power alternatives. Kazakhstan has the necessary natural, climatic, and economic conditions to develop sustainable energy generation. Based on the above-mentioned facts, we may forecast that Kazakhstan in next years will invest more in the development of renewable energy to avoid environment unfriendly and expensive fossil fuel power.

The country has a considerable potential in wind power generation estimated at 929 billion kWh per year or 354 GW of installed capacity, which is more than 10 times higher than current consumption in the country. The government plans to construct 34 wind farms with a total capacity of more than 1,787 MW by 2020 and 27 solar farms with 664 MW capacity.


Renewables in Electricity Production of Kazakhstan

In 1Q 2016, renewable energy facilities' total installed capacity reached 252 MW, excluding major hydroelectric power stations, which was 74 MW or 40% higher on a YoY basis. The main increase was due to wind and solar farms. The installed capacity increased by 52 MW and 17.5 MW YoY, respectively. In 2015, 14 renewable energy facilities were built with a total capacity of 120 MW. Solar farm Burnoe with a capacity of 50 MW in Zhambyl region and wind farm Yerementau with a capacity of 45 MW in Akmola region were the largest projects.

In 1Q 2016, the renewable power generation amounted to 178 million kWh compared to 82 million kWh in the same period of last year. The majority of generated electricity was provided by small hydropower plants (118 million kWh) and wind farms (60 million kWh).

Fighting corruption remains an important public policy priority in Kazakhstan, as reflected in its highest officials' statements. Public authorities, civil society and business sector representatives should be involved in the strategy development process against corruption, which is one of the main hurdles preventing foreign investors in Kazakhstan renewable energy sector. The new strategy should provide for a more effective mechanism of its monitoring.

EBRD support for the Renewable Energy Sector of Kazakhstan

EBRD announced at the end of 2016 renewables finance framework for Kazakhstan intending to provide senior loans to private and in exceptional cases public companies for a total amount of up to EUR 200 million to finance the construction and operation of renewable energy projects in Kazakhstan including solar, wind, small hydropower and biogas energy sources (RES) and modernization and strengthening the electricity grid to enhance the integration of renewable energy sources into the electricity grid.

The purpose of Kazakhstan's framework is to facilitate systemic change in the country's power generation sector where coal remains the dominant fuel by supporting the development of private renewable energy projects and moving towards sustainability of the power market. Despite considerable renewable energy resources, the current share of renewables (excluding large hydro) in the total generation is less than 1%. The Framework will support the achievement of the country's target to increase the share of renewables to 3% of total generation by 2020, reduce carbon-intensive power generation, and reduce the power deficit in Kazakhstan's southern regions.