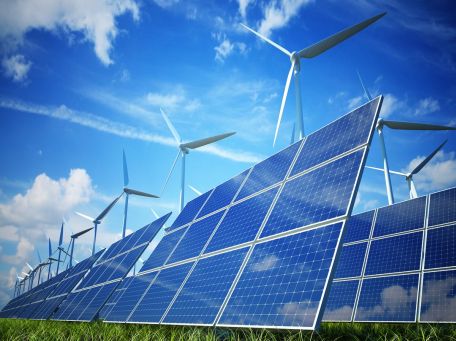 /12th February 2019, RENEWABLE MARKET WATCHTM/ The Ukraine renewable energy market saw fast-paced development in the past years, reported Renewable Market Watch™. About EUR 2 billion have been invested in energy efficiency and renewable energy of Ukraine for the last four years, according to the State Agency on Energy Efficiency and Energy Saving (SAEE). Almost half of this amount (approximately € 800 million) was attracted in 2018. During the first half of 2018, roughly 270 MW of renewable capacity were installed at a feed-in-tariff in Ukraine to generate electrical power from renewable energy sources. It is a twofold increase over the same period of 2017 (127 MW) and exceeds the capacity installed for entire 2017 (257 MW). Most of the new renewable power facilities are solar photovoltaic (PV) power plants with a total capacity of 206 MW. According to the study by the National Academy of Sciences of Ukraine, with appropriate investment, about 90% of the Ukrainian energy can be produced from renewable energy sources.

The European Bank for Reconstruction and Development (EBRD) announced at the end of January 2019 a syndicated loan of €150 million for constructing a 250 MW wind farm in Ukraine, which will be the country's largest of its kind. The loan will be extended to local developer SyvashEnergoProm LLC, co-owned by renewable energy groups Total Eren of France and NBT of Norway, to construct the initial 133 MW phase, according to a statement from EBRD.

The wind farm will be built in the Kherson region of southern Ukraine and is expected to begin power generation by the end of 2019. Once the project is fully commissioned, it is expected to reduce carbon dioxide emissions by 470,000 tonnes annually, and to produce over 850,000 MWh of renewable energy each year – enough to provide power to the Ukrainian municipality of Rivne, which has approximately 100,000 households.

The EBRD and the Black Sea Trade and Development Bank (BSTDB) are contributing to Ukraine’s objective of bringing the share of renewables in the country’s total electricity consumption to 25 per cent by 2035 with the provision of €36 million in funding for three new solar plants in southern Ukraine. The two financial institutions' loans will help construct and put into operation solar power plants with a total installed capacity of 47 MW. Once in operation, the plants will improve Ukraine’s energy supply mix and contribute to the country’s energy security.

The investment project will be implemented by Rengy Solar BV, co-owned by the Norwegian solar developer Scatec Solar ASA and by Rengy Development Group, a well-established local renewables developer.

At the end of 2018, the Ukrainian parliament adopted Law No 2628-VIII ’On the Introduction of Changes to Tax Code of Ukraine and certain other legislative acts of Ukraine on Improvement of Administration and Review of Rates of Certain Taxes and Dues’. According to this Law, equipment envisaged by the following codes of the Ukrainian Classifier of Foreign Economic Activity shall be exempted from import VAT until 2022: 8502 31 00 00, 8541 40 90 00, 8504 23 00 00, 8504 40 88 00. It appears that the mentioned codes cover major parts of solar and wind farms, such as solar panels, inverters, wind turbines, etc. The Law also permitted the construction of renewable energy power plants on industrial, transportation, communication, military protection, and certain other types of land without change of the purpose.

Furthermore, the 'Draft law on the transition to green auctions' is actively prepared for second reading in the Ukrainian Parliament by the Fuel and Energy Committee together with ministries, State Agency on Energy Efficiency and Energy Saving of Ukraine (SAEE) and other stakeholders. Ukraine aims to create a transparent and competitive renewable energy market through auctions. Therefore, potential renewable power producers will compete for installing solar, wind or another type of renewable energy power plants and selling clean electricity. Auction winners will have the opportunity to sell clean electricity for 20 years.