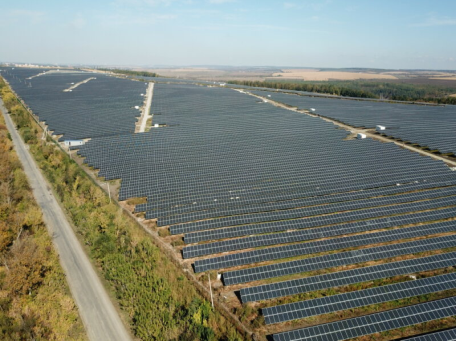 /29th April 2019, RENEWABLE MARKET WATCHTM/ The second-largest solar project in Ukraine has been opened at the end of March 2019 in the near vicinity of the Panovtsy village in Kamianets-Podilskyi district of Khmelnitsky Oblast by ICU and VR Capital Group, reported the Renewable Market Watch™. The solar PV power plant is a joint-venture by ICU, independent asset management, private equity and investment advisory firm specialising in Central and Eastern Europe and VR Capital Group, an alternative asset manager specializing in global emerging markets. The plant has been commissioned by Podilskenergo and represents an investment in materials and construction of approximately US$55m. The plant's peak capacity is 63.8MW and the plant will generate approximately 68,200 MW/H of clean energy per year. The electricity generated will supply one-third of all the households in Kamianets-Podilskyi city and help decrease carbon emissions by 67,000 tonnes annually. The plant is one of the largest foreign direct investment projects in Ukraine. It will assist in the nation’s transition to renewable energy, including meeting Ukraine’s pledge to, by 2030, reduce its greenhouse gas emissions by at least 40 percent from 1990 levels following the 2015 Paris agreement.

The power plant will provide full-time employment to 45 workers. Podilskenergo will also allocate UAH2.6m to the village budget for rent and become the biggest tax contributor to the local community. These funds will be spent on funding the local community’s welfare and social needs.

The contractors did everything according to the schedule and construction plan. The company received regular reports at the main stages, the work was carried out transparently, according to the VR Capital Group's CEO, Richard Deitz. He said that by the end of the summer in Mykolaiv region a third joint project with the ICU will be launched. The project is a solar PV power plant, consisting of 11power  facilities with a total peak capacity of about 127 MW.

At the end of 2018, the Ukrainian parliament adopted Law No 2628-VIII ’On the Introduction of Changes to Tax Code of Ukraine and certain other legislative acts of Ukraine on Improvement of Administration and Review of Rates of Certain Taxes and Dues’. According to this Law, equipment envisaged by the following codes of the Ukrainian Classifier of Foreign Economic Activity shall be exempted from import VAT until 2022: 8502 31 00 00, 8541 40 90 00, 8504 23 00 00, 8504 40 88 00. It appears that the mentioned codes cover major parts of solar and wind farms, such as solar panels, inverters, wind turbines, etc. Also, the Law permitted the construction of renewable energy power plants on industrial, transportation, communication, military protection and certain other types of land without change of the purpose.

Furthermore, the 'Draft law on the transition to green auctions' is being actively prepared for second reading in the Ukrainian Parliament by the Fuel and Energy Committee together with ministries, State Agency on Energy Efficiency and Energy Saving of Ukraine (SAEE) and other stakeholders. Ukraine aims to create a transparent and competitive renewable energy market through auctions. Therefore, potential renewable power producers will compete for installing solar, wind or another type of renewable energy power plants and selling clean electricity. Auction winners will have the opportunity to sell clean electricity for 20 years.

VR Capital Group Ltd., through its principal subsidiaries including VR Advisory Services Ltd (together, “VR Capital Group”) is an alternative asset manager with assets under management over US$4.5bn. Since commencing operations in 1999, the firm’s investments have been concentrated in global emerging markets with a propensity to allocate capital to regions undergoing periods of macroeconomic stress where investment capital is scarce. VR Capital Group’s external client base is primarily composed of institutional investors from the United States and Western Europe, including university endowments, charitable foundations, family offices and institutional asset allocators. VR Capital Group’s advisory affiliates are regulated by the U.S. Securities and Exchange Commission and the U.K. Financial Conduct Authority.

Founded in 2006 by senior investment professionals from ING, ICU is Ukraine's leading asset manager with over $500m in assets under management. The company's strategy includes significant allocations to venture capital, alternative energy & renewables and distressed debt. Investment decisions are supported by robust macroeconomic and sectoral analyses from our in-house team of research economists. We aim to provide our clients with superior risk-adjusted returns across many asset classes. The firm is expanding its reach into key European markets via a combination of organic growth and acquisition and continues to expand the range of its investment offerings.