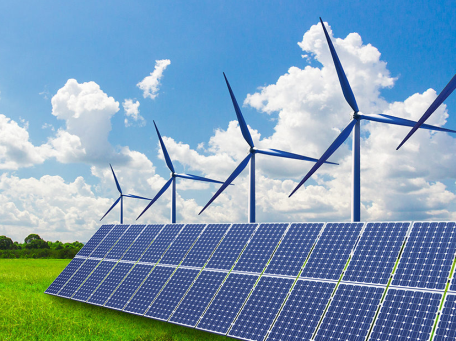 /19th November 2019, RENEWABLE MARKET WATCHTM/ Worldwide, renewable energy generators are entering into power purchase agreements (PPAs) with corporations, due to the falling price of renewable power. Furthermore, electricity markets are changing and around the world electricity regulation is also changing to meet the requirements of the accelerating energy transition. Many government policies and regulations are moving in the direction of carbon emissions reduction, more liberalization, smart grids combined with greater flexibility and easier market access for end-users. The result is a combination of a stronger policy focus on environmental goals and reduced government control and supervision of national electricity markets. These trends have the potential to give consumers a greater role in electricity markets than ever before. Many government commitments in Europe to manage climate change can be met with the implementation of clean energy transition programs and with the support of corporate renewable PPA structures, reveals the recently published study ’Europe Corporate Renewable PPA Market Report 2019 ÷ 2028’. This study considers the whole array of options available to corporates looking to source renewable electricity in Europe. Despite the less developed corporate renewable PPAs market in Europe than the USA, the Renewable Market Watch™ predicts increased support and acceptance of the corporate renewable PPA model in European countries in the next decade.

Renewable Market Watch™ has identified the key market drivers that will impact investment volume and renewable power capacity additions under the corporate PPA structures over the coming decade in Europe through extensive research and discussions with experts in the industry. Corporate sourcing of renewables is already taking place in over 11 countries in Europe and, as of 2018, over 2GW of corporate renewable PPAs has been signed. There is variation in corporate renewable PPAs between the European countries because of the different legal and regulatory frameworks.

Wind energy accounts for 85% of corporate PPAs in Europe to date, while the rest 15 % is for solar energy. The top five countries in Europe by signing corporate renewable PPAs in 2018 are Norway, Sweden, the Netherlands, the UK and Spain due to favourable policy conditions. The more PPAs in Germany, Denmark, France, Poland and the rest of Europe are expected, once the wind and solar assets start coming off of subsidies in the next few years. 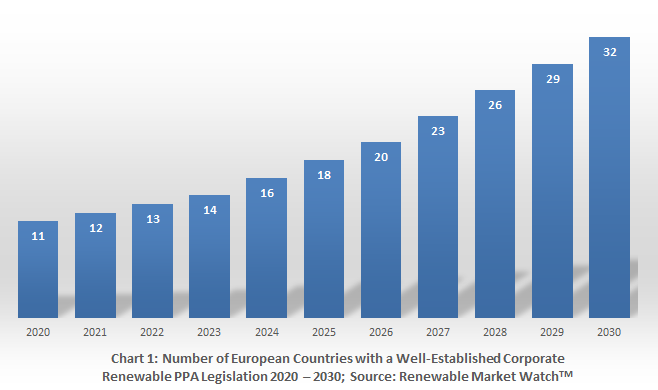 The European corporate PPA market shall be dynamic in the next decade. Nordic countries shall continue to be the leading market in Europe regarding the corporate sourcing of renewable electricity by 2022. However, the more PPAs in Germany, France, Poland and the rest of Europe are expected, once the wind and solar assets start coming off of subsidies in the next few years. According to the 'Europe Corporate Renewable PPA Market Report 2019 ÷ 2028', the number of countries with a well-established corporate renewable PPA legislation shall triple between 2020 and 2030. Renewable Market Watch™ expects the role of solar energy in the European Corporate Renewable PPA market to increase since 2020. 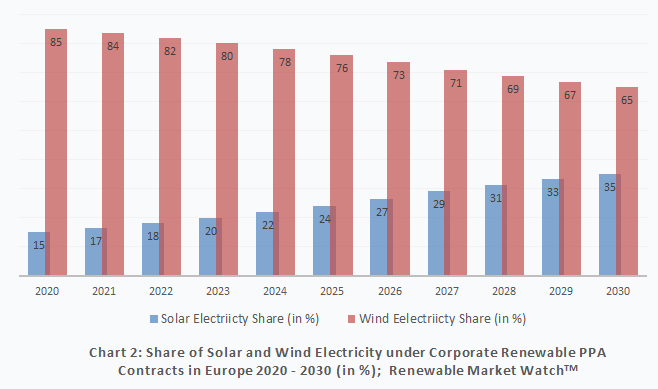 We forecasted by 2030 the share of solar electricity in Europe under corporate PPA contracts to reach at least 35 % from only 15 % in 2018. Subsidies and support schemes for energy storage capacity, which have been started in Germany and other EU member states since 2015 are projected to positively impact the European corporate renewable PPA market between 2023 and 2030. Legislative changes are considered in the Nordic and Western European countries to enhance the existing corporate PPA regulations with appropriate rules for sourcing and procurement of renewable electricity by municipalities and other public entities.

According to the classification adopted by IRENA, in 'Europe Corporate Renewable PPA Market Report 2019 ÷ 2028' are considered four options for corporate sourcing of renewable electricity:

2) Renewable power purchase agreements (PPAs), i.e. contracts under which a legal or natural person agrees to purchase renewable electricity directly from an energy generator. This option includes both physical and virtual PPAs.

3) Unbundled guarantees of origin (GOs), i.e. purchasing GOs (from, e.g. an RE generator or a third-party broker) that certify the renewable attributes of electricity without acquiring the electricity for which the GOs were issued. Companies use such unbundled GOs to match (at least part) of their consumption of electricity.

4) Renewable (green) energy offers from utilities or electricity suppliers; such suppliers provide green grid electricity by either direct sourcing from independent RE generators or by bundling electricity with GOs (to prove that their electricity is green).

Electricity markets in the EU are faced with serious challenges, such as the transition towards a low-carbon energy system, the cost-efficient integration of variable renewable energy sources, the trend towards decentralised renewable energy production, the evolving role and stronger participation of energy customers (both households and industrial customers) and the requirement to ensure the security of supply in the short and long term efficiently and at affordable costs.

To address the electricity market challenges, the European Commission presented a legislative package on 30 November 2016. It consists of a communication entitled ‘Clean Energy for all Europeans’, eight legislative proposals and many reports and communications. New rules to create a Europe-wide market for electricity that is cleaner, more competitive and better able to cope with risks, were approved by the European Parliament on 26th of March, 2019.

One of the main objectives of the new rules is to allow at least 70% of trade capacity to cross borders freely, making it easier to trade renewable energy across EU borders and hence support efforts to reach the EU’s binding goal of 32 % renewables by 2030. The free cross-border electricity trade shall support a lot the young corporate renewable PPA market in Europe, according to the Renewable Market Watch™.  Energy should flow freely across the EU - without any technical or regulatory barriers. Only then can energy providers freely compete and provide the best energy prices, and can Europe fully achieve its renewable energy potential.