/3rd September 2021, RENEWABLE MARKET WATCHTM/ The Czech Republic is the fourth most energy-intensive country in the EU mainly due to the high intensity of its industry (such as metallurgy, steel and coal). After Germany and Poland, the Czech Republic is the third-largest coal producer in the EU. Although gains have been made in reducing energy intensity in the industry sector, the potential for energy efficiency improvements in the buildings and transport sectors is substantial. Energy use and carbon dioxide emissions in these sectors are growing. Energy efficiency improvement is considered a priority to reduce energy consumption and address climate change while also providing benefits for energy security. Investments in new renewable energy generation capacity in the Czech Republic are moderate in the past five years. Coal remains the primary energy source for electricity production, followed by nuclear power and hydropower. However, activity on the solar photovoltaic (PV) power market in the Czech Republic has been increasing since 2018, according to the recently published study Czech Republic Solar Photovoltaic (PV) Power Market Outlook 2021 ÷ 2030.

By 2007, the Czech solar photovoltaic market was undeveloped with only 4 MW of cumulative installed capacity. The favourable renewable energy law with a very attractive feed-in tariff led to an uncontrolled boom in solar PV installations without an adequate government reaction between 2009 and 2011, when almost 2 GW of capacity was installed. In early 2011, the Czech government imposed retroactive 26 % tax on the income of previously installed PV plants between 2009 and 2010, and this action brought panic and raised international scandal. A lot of concerned investors started court trials against the government. Also, the Czech Republic completely stopped subsidising photovoltaic installations and the feed-in tariff from 1st January 2014, regardless of the size of the photovoltaic power plant.

However, Renewable Market Watch™ registered that after a 6-year stagnation in the solar photovoltaic market in the Czech Republic (since 2018), the activity in the small scale residential and commercial segment increased. According to the Czech Solar Industry Association, there are nearly 41,600 solar systems with a total capacity slightly exceeding 2.2 GW at the end of 2020 in the Czech Republic. 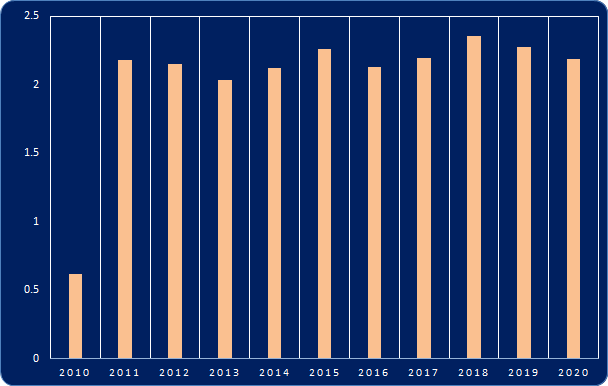 Changes in the European Union’s renewable energy policy and an accelerated market shift towards renewable energy sources could have a material adverse effect on the results of operations and financial condition of the ČEZ Group that is the largest utility and biggest public company not only in the Czech Republic but also in Central and Eastern Europe. The current generation capacity of the company predominantly consists of coal and nuclear generation. For this reason, the ČEZ Group aims to expand its existing non-nuclear power generation and diversify the available generation capacity to reduce CO2 emissions and increase the flexibility of its generation facilities, reveals the study Czech Republic Solar Photovoltaic (PV) Power Market Outlook 2021 ÷ 2030. The ČEZ Group is preparing to build several large scale solar photovoltaic projects with a total capacity of over 600 MW and plans to increase its solar project portfolio to 1,000 MW (1GW) by the end of 2025 (ten times increase from its current level).

In the middle of July 2021, the Vienna-based renewable energy company Enery Development GmbH has completed the acquisition of the Energy 21 solar PV portfolio owned by funds managed by CEE Equity Partners Ltd. Energy 21 is the third largest operational solar PV portfolio in the Czech Republic and consists of 36 solar PV power plants with a total installed capacity of 71 MW. With this acquisition, Enery has now 45 solar PV power plants in operation under its ownership and becomes one of the leading renewable energy operators in Central and Eastern Europe (CEE).

The Czech company Photon Energy Group plans to expand its current solar photovoltaic projects portfolio from 60.6 MWp to 115.1 MWp by the end of 2021. Photon's solar energy projects are located in the Czech Republic, Slovakia, Hungary and other countries. Also, the company will expand its business to PPA-related projects and "behind-the-meter" solar PV projects for industrial customers and other power off-takers. 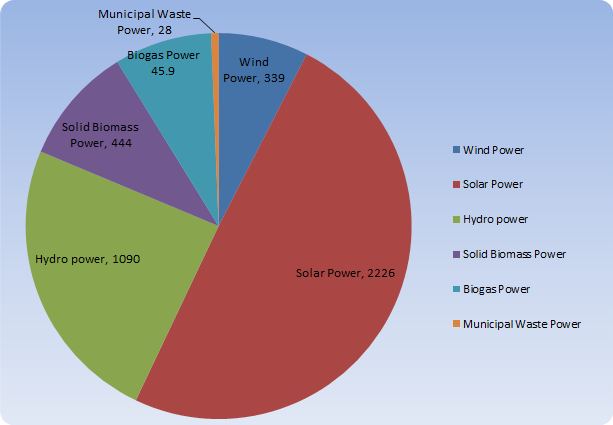 At the beginning of June 2021, the Czech Ministry of Environment announced the start of the SER+ program with an initial budget of CZK4.5 billion (€182 million, $216 million). This is a rebate scheme for the support of solar photovoltaic projects supported by the EU’s Modernisation Fund. The projects with a capacity below 1 MW and above 1 MW will be available to apply for funding through the competitive procedure. In the report, Czech Republic Solar Photovoltaic (PV) Power Market Outlook 2021 ÷ 2030 is included information about the recent solar projects in the Czech Republic that are playing and would play a key role in expanding the solar power market in the country in the next few years. 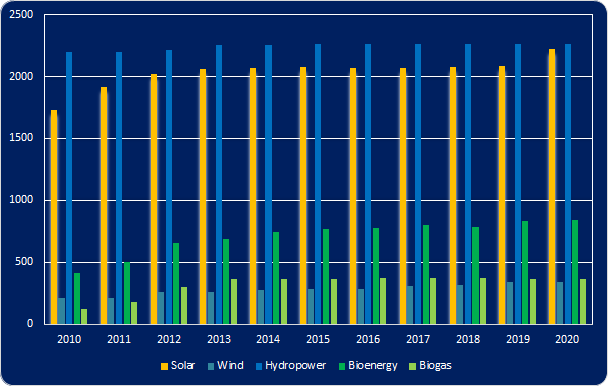 Also, Czechia has introduced an obligation for new buildings to meet the criteria of near-zero-energy buildings, whose energy consumption is covered mainly by renewable sources of energy. Meanwhile, besides the renewable energy supply, Czechia is also planning to increase the use of nuclear energy.

The Political System of the Czech Republic

The Czech Republic is a unitary parliamentary republic. For this reason, the country’s foreign policy is inside the jurisdiction of the government, whose official pro-Western geopolitical orientation is well known. Furthermore, the majority of the country’s population is absolutely convinced that Czechia must remain steadily connected with the West World. In this regard, the Czech Republic has been a member of NATO since 1999 and a member state of the European Union since 2004.

2021 is an election year in the Czech Republic and the expectations show that in October we will probably see the traditional electoral fight of left versus right as well as voting confrontation between pro-Eastern vision and a pro-Western political orientation.

Despite the Czech President’s clearly expressed pro-Russian position, the widely discussed current investigation into possible direct Russian intervention in Czech territory seems that additionally hardened Prague’s already taken pro-Western geopolitical position. (FYI: The President of the Czech Republic is the head of state, but holds relatively limited powers and is directly elected to up to two five-year terms, whilst the Prime minister is the head of government and holds the executive power).

At the same time, the Czech government was not so clear on the issue of whether Russia's state-owned Rosatom Nuclear Energy Corporation should take part in the tender for the expansion of the Dukovany Nuclear Power Plant. Contrary to the initial expectations, Prague did not exclude Rosatom from participation.

Furthermore, the country's hesitating position, in addition to President Zeman's pro-Kremlin vision, had some consequences for the Czech foreign policy. More precisely, Prague’s vague reaction surprised unpleasantly Slovakia and the Baltic states, which had already expelled Russian diplomats, showing their solidarity with the Czech Republic.

The turnaround of the Czech foreign policy towards China is well known. From a troublemaker for China during the 1990s and 2000s, the Czech Republic gradually transformed into a showcase of new horizons for China-CEE relations. To be more precise, the 2013-2017 period is considered as the ‘golden age’ in the Czech-China relations, a period in which the two countries had very close relations.

Subsequently, in 2018, the balance in their relations changed, when the Czech cyber security agency issued a warning about the use of the Chinese company Huawei. Later on (in October 2020), the Czech telecommunication company CETIN announced Ericsson as the sole supplier of its 5G network, following the example of a number of EU countries, which have also overlooked Huawei. Moreover, Czechia’s relations with Taiwan is another delicate issue, because the Czech political opposition found a way to differentiate itself from both President’s and government’s positive policy towards China. More precisely, Prague’s mayor directly presented Taiwan as an alternative partner of the Czech Republic.

After that, a joint statement from Czechia’s political leadership (including the President, the Prime minister and the heads of the lower and upper house of the Czech Parliament) affirmed that Czechia recognises the one-China principle. In this regard, the Czech Republic and China are sharing the opinion that their bilateral dialogue is maintained.

The Coal-related Industry in the Czech Republic

In Czechia, electricity is produced mainly from coal, nuclear energy and natural gas. Therefore, fossil fuels are still playing a huge role in the energy sector of the Czech Republic. It is mainly related to the fact that the country has its coal resources available. Czechia’s coal reserves are estimated to approximately 705 million tonnes. Brown coal is mainly extracted in North Bohemia, while hard coal is mined from the Ostrava-Karviná basin (FYI: The latter coal basin is among the largest in Europe. Its major part is actually located in Poland, but one-sixth lies in the territory of the Czech Republic).

Czechia’s coal-related industry has always played and will probably continue to play a significant role in the national economy. In 2018, the share of coal in gross electricity generation amounted to 49.5%. However, taking into consideration the fact that the dominating coal production is closely connected with the subsequent large amounts of carbon emissions and therefore it is a substantial threat to local air quality, the country is taking action to reduce its carbon footprint. According to the most recent State Energy Policy, the share of coal in gross electricity generation should decrease to between 11% and 21% by 2040.

To ensure the sustainable use of coal in the future, Czechia is engaged in an ambitious programme to renovate and renew the coal-fired power stations in North Bohemia. More precisely, the 800 MW Tušimice II power plant has been renovated, reducing its CO2 emissions significantly and extending its life (to 2035). The life of the 750 MW Prunéřov II power plant has also been extended, following the renovation of three units, successfully reducing CO2 emissions by 40%. In addition, the 660 MW Ledvice power plant has an efficiency of 42.5%. Last but not least, the Czech Republic has oil and gas production in the southern Moravia region.

Briefly, the Czech Republic has a highly developed energy sector. Although the production of conventional (mostly coal-relying) energy is still commoner than renewable energy alternatives, it seems that Czechia is determined to go greener. Most probably, despite the country’s long-term coal-related energy traditions, we could expect that the renewable energy sources will be the country’s main power solution in the foreseeable future.

Renewable Market Watch™ expects that solar market drivers in the Czech Republic by the end of 2021 will be small scale residential rooftop installations below 20 KW and commercial rooftop installations below 1 MW for own consumption. Developments will be realised mainly through local investors. By 2022/23 we expect the building of new large scale solar photovoltaic power plants in the country. The projects of building new large scale PV plants are also connected with new subsidies for ground-mounted solar installations, which the state will support within the support of the EU’s Modernization Fund. For the first time in the Czech Republic, the construction of floating or agrivoltaic solar power plants will be supported.