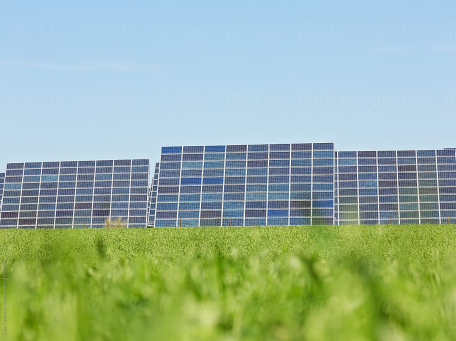 /12th January 2021, RENEWABLE MARKET WATCHTM/ France crossed the significant capacity threshold of 10 GW installed in 2020. It is now halfway towards its MAEP (Multi-Annual Energy Programme) goal of 20.1 GW of solar capacity by 2023, according to SolarPower Europe. Secondly, despite the impact of the pandemic, France produced 4.46 TWh of solar in the third quarter of 2020, thereby beating its record from 2019 (4.43 TWh). This is a significant achievement and an important step towards building back better. Solar photovoltaic (PV) power in the European Union had a strong performance in 2020 despite the negative health, social and economic effects of the COVID-19 (Coronavirus) pandemic, revealed the recent update of Europe Solar Photovoltaic (PV) Power Market Outlook: 2020 ÷ 2030.  The climate targets that have been set are also promising. The Climate & Energy Law adopted last year confirmed the Energy Transition for a Green Growth law with 2030 targets. The detailed MAEP sets out the requirements for each type of technology, and the targets for 2028 now lie between 35.1 GW and 44 GW in cumulative capacity. To keep in line with these targets, the annual market growth rate will need to rise to 2 GW/year between now and 2023, and then 4 GW/year between 2023 and 2028. As a result of these targets, solar is positioned to be one of the most important contributors to the French energy transition.

Integrated  National Energy and Climate Plan of France by 2030 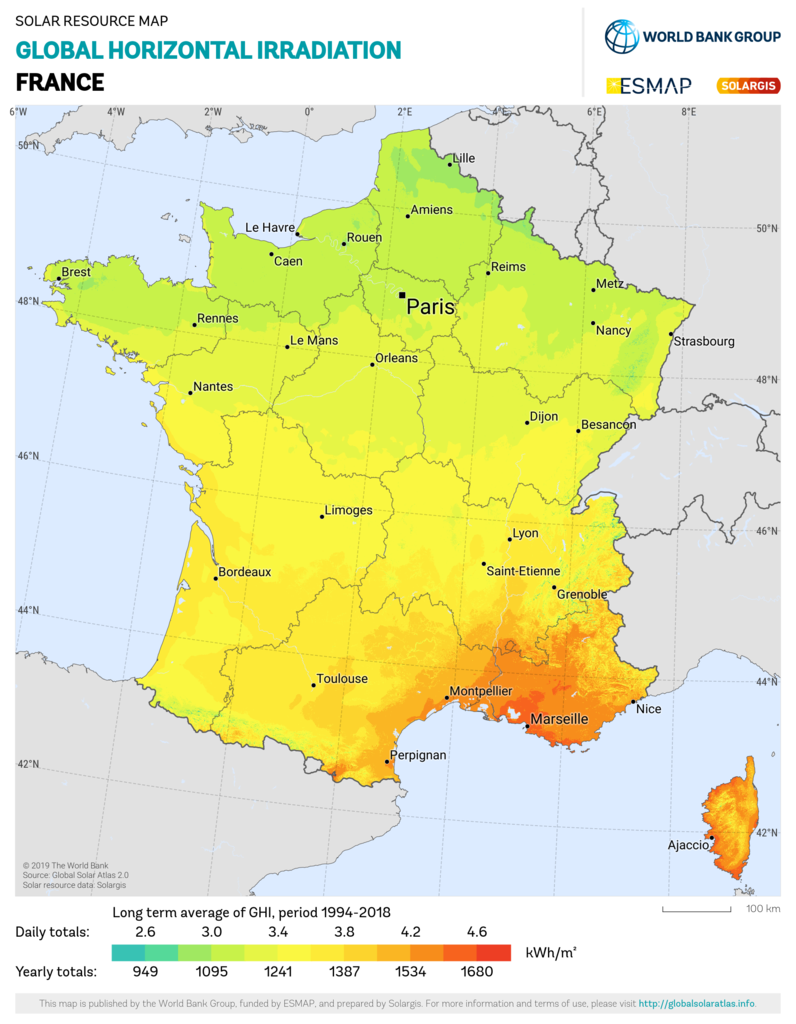 France plans to double installed renewable electricity capacities by 2028 compared to 2017, with an installed capacity of 101 to 113 GW by 2028 and 36% renewables in the electricity mix by 2028. This represents a 50% increase in installed capacities between now and 2023. The solar radiation potential on the French territory is considerable despite the differences in the various regions' sunlight intensity. The average annual sunshine duration in France is roughly 2,214 hours, and the average solar radiation resource is 1,387 kWh/m². The irradiation in France ranges from 3 sun hours/day in the north to 5 sun hours/day in the south. The output of a solar array is a function of age, temperature, tilt, shading, tracking, and insolation.

In 2015, France passed a law to begin the transition that will allow for a reduction in the final consumption of nuclear energy throughout the country to 50% and, at the same time, allow the consumption of renewable energy to be increased to 23% in 2020 and up to 32% in 2030. To achieve this goal, it will be necessary to install 10.2 GW of photovoltaic power by 2020 and between 18.2 and 20.2 GW five years later in 2023.

On December 16th, French solar contracts signed between 2006 and 2010 were stifled in an amendment to the Finance Bill 2021, which called for renegotiating prices of solar power contracts during this time period. This amendment had been rejected by the French Senate and faced significant opposition but was pushed through by the Parliament. It will now be essential to examine the details of the measure and the modalities of its implementation in order to ensure that solar remains strong in France, contributing to the country’s ambitious 2028 MEAP targets and beyond.

The Renewable Market Watch™ in its report Europe Solar Photovoltaic (PV) Power Market Outlook 2020÷2030 projects serious growth of solar power generation in  France by 2030. The progressive shift from feed-in to partial self-consumption for residential systems (under 36 kW), initially observed in 2017, was confirmed in 2019. Indeed, in 2019, self-consumption amounted to more than 65% of new grid connection requests (in number of installations), compared to 55% in 2018 and around 30% in 2017 for this segment.

Multi-megawatt systems (building or ground-based systems) were exclusively within the framework of national tenders (only existing support scheme for systems of over 100 kW) and represented nearly 42% of new capacity (406 MW in 2019). Cumulative solar PV installed capacity as of the end of 2019 in France reached 9 934 MW and exceeded 10 GW in 2020.

In our report Europe Solar Photovoltaic (PV) Power Market Outlook: 2020 ÷ 2030  we have included information about the recent solar projects that are and would play a key role in expanding the solar power market in this country. You may read on the next rows more about four of these projects.

Euractiv reported that the most powerful floating solar PV plant in Europe was inaugurated in southern France on Friday (18 October 2020), marking another milestone in the development of solar energy. The Rhône valley in southern France is best known for its fine wines and gorgeous food. Now, it can also add solar power to its list of attractions. The O’MEGA1 project is a 17 megawatt (MW) solar plant situated in Piolenc, a commune in the Vaucluse department, near Orange and Avignon. The project is unique in several ways. To start with, it is the largest in Europe based on floating solar technology. According to its promoters, the floating structure helps reduce conflicts over land use because it can be installed on drinking water reservoirs, industrial pools, flood plains or quarry lakes.

French utility Engie and developer Neoen are planning to invest about €1 billion ($1.2 billion) to build a 1-gigawatt solar-powered low carbon energy park in France, comfortably breaking records for Europe’s largest solar project and incorporating green hydrogen production to supply transportation and energy needs. The Horizeo project in western France’s Nouvelle-Aquitaine region will also include the development of a data center that would use power from the project, reported the Greentech Media. Engie said remaining power not used by the green hydrogen electrolyzer or data center would be contracted via power purchase agreements (PPAs), with no plans to take advantage of France’s renewable tendering programs.

The French solar energy market is expected to be heading toward an expansion phase by 2030. Factors propelling the market growth include concerns regarding negative environmental impacts of fossil fuels, a decrease of nuclear capacity and coal power generation capacity, compliance with the European Green Deal, and others. Also, serious growth in the residential and commercial building stock and economic growth in the largest French cities are significant factors driving the solar energy market. The COVID-19 crisis impacts the power market (including solar photovoltaic sectors) in France, but we project a solid photovoltaic energy growth in these countries in the next years.